Happy St. Stephen’s Day! Today is the feast day of St. Stephen, the first Christian martyr who was stoned to death by devout religious people for disagreeing with them and speaking truth to power. Yay!

Stephen was a deacon in the very early church, charged with caring for the widows in the church and community in Jerusalem. You can read about him in Acts 6 and 7. He was described as “a man filled with faith and the Holy Spirit” and “full of God’s grace and power.” And so, of course, the religious power-brokers were determined to destroy him.

They stirred up the people against him and dragged him before the Sanhedrin with a lot of false accusations and lies (does this sound familiar? Jesus went through this about 35 years before Stephen.) Stephen’s answer to their charges was to tell them The Story because apparently, they had lost the plot. Stephen told them the story of God’s grace and pursuit of God’s people, starting with Abraham and ending with their killing of Jesus, the Righteous One.

“You stiff-necked people! Your hearts and ears are still uncircumcised. You are just like your ancestors: You always resist the Holy Spirit! 52 Was there ever a prophet your ancestors did not persecute? They even killed those who predicted the coming of the Righteous One. And now you have betrayed and murdered him— 53 you who have received the law that was given through angels but have not obeyed it.”

And with that, he was seized and stoned to death. While they were killing him, he prayed, “Lord don’t hold this sin against them.” Again, this sounds familiar. Stephen was so much like Jesus, that the religious people couldn’t stand it and resorted to violence and murder.

So, on December 26th we celebrate St. Stephen. Not really in the United States, but in most European countries it is a religious holiday. In Ireland St. Stephen’s Day is a public holiday, with people spending time with their family and friends. In Irish folklore, the wren is a symbol of St. Stephen because of the legend that a wren’s tweeting betrayed him to his murderers. It became a custom to hunt down and stone a wren and parade it around on a stick collecting money door-to-door for a party. Thankfully, now they use fake birds and don’t actually kill wrens because of a folk tale. I mean, it’s silly to imagine that “tweets” could betray someone and lead to death and destruction of innocent people…hey, wait a minute! 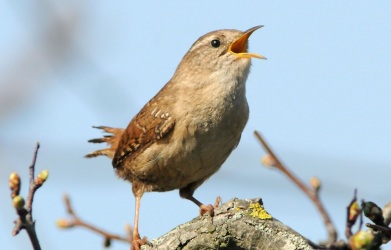 Another interesting fact I learned: in Hungary in 1949 the communist government co-opted the holiday to make it about politics and renamed it Constitution Day. Well, not to worry; after the collapse of that government, the people once again celebrated it as St. Stephen’s Day. Hmm…a group of people hijacking a religious holiday for their own selfish, political reasons. That would never happen today. Right?

Finally, a little music to close our celebration. Elvis Costello wrote a song called “The St. Stephen’s Day Murders” and performed it with the Irish band, The Chieftains on their 1991 album The Bells of Dublin. It is a strange song that may, or may not, be about poisoning your relatives on the day after Christmas. It is certainly about wanting to. After having spent time with extended family on Christmas, being jolly and choking back our comments and disagreements with a little (or maybe a lot of) eggnog and spirits, one more day with them could just push us over the edge! It’s a funny song, in a sort of macabre way. Enjoy it here.

So happy St. Stephen’s Day—and be on the lookout for “tweeting” wrens!

View all posts by pastorsoup